THE 3 SEAS DIGITAL HIGHWAY
ABOUT THE THREE SEAS INITIATIVE:

The Three Seas Initiative (3SI) is an intergovernmental political and economic project developed and launched by the Polish President, Andrzej Duda, with the Former President of Croatia (2015-2020), Kolinda Grabar-Kitarović, in 2016. It was oriented towards boosting cooperation and interconnectivity between the 12 CEE countries which are located between three seas, meaning the Baltic, Adriatic and Black Sea, with the focus on transportation, telecommunication and energy sectors.
ABOUT THE DIGITAL 3 SEAS INITIATIVE:


Drawing upon the Three Seas Initiative, the Kosciuszko Institute launched in 2018 the Digital 3 Seas Initiative which proposes solutions to tackle technology and cybersecurity within this international framework. It is a portfolio of cross-border projects that aim to develop digital infrastructure, joint investments and R&D, as well as political and legislative concepts to implement at the EU level. 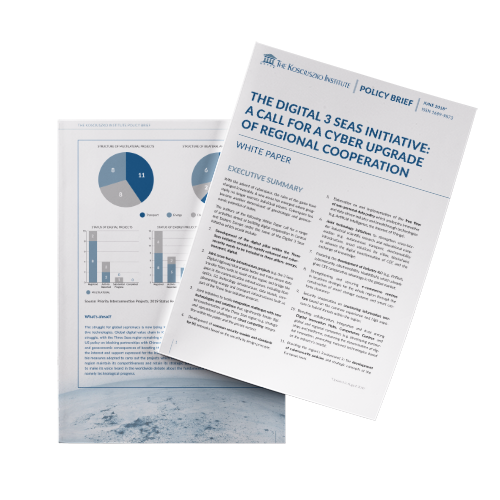 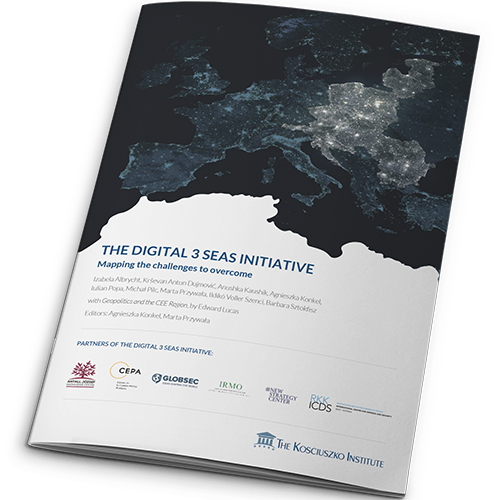 THE 3 SEAS
DIGITAL
HIGHWAY
ABOUT THE 3 SEAS DIGITAL HIGHWAY
The 3 Seas Digital Highway is one of the most important projects put forward by the Digital 3 Seas Initiative. Its aim is to develop a secure digital infrastructure running from North to South, interlinking member states and composed of two elements: optical fibre along with technologies which help create a 5G connection between the countries. The true success came when the Ministry of Digital Affairs of Poland, together with Chancellery of the President of the Republic of Poland, officially submitted this project during the Three Seas Summit in Bucharest in September 2018 where it was accepted and put on the list of “priority interconnection projects”. 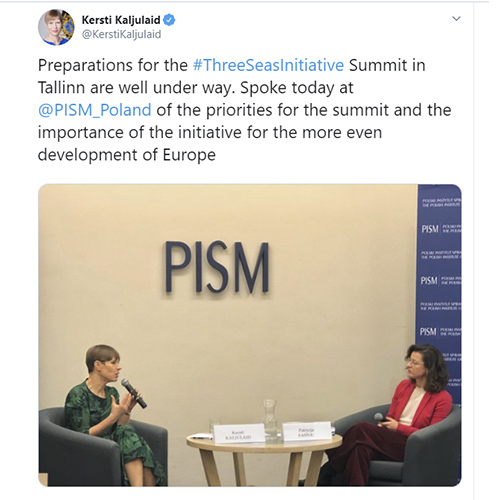 President of Estonia, Ms Kersti Kaljulaid, declared that one of the key aims of the Estonian presidency in the Three Seas Initiative will be to operationalize actions in the digital pillar and highlight the aspect of cybersecurity of the infrastructure connecting the region – transport, energy and digital. 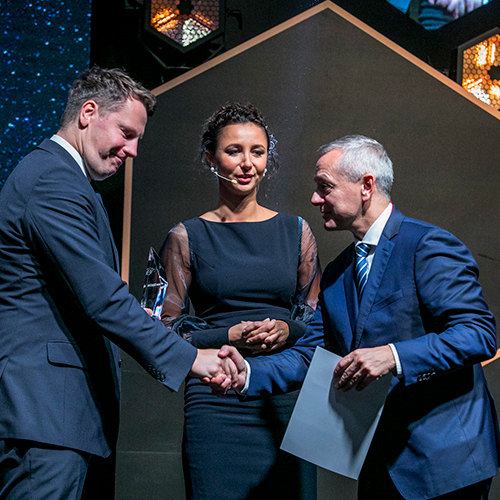 For Estonia and its President HE Kersti Kaljulaid efforts made towards advancing the quest for cybertrust and securing the world’s digital DNA, as well as in appreciation of Estonia’s support and contribution to the digital pillar of the Three Seas incl. Digital Highways concept. 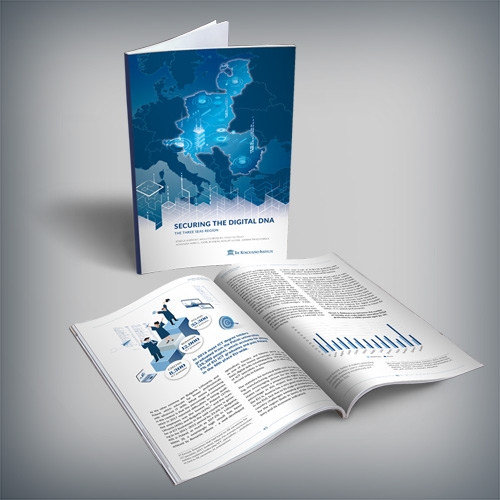 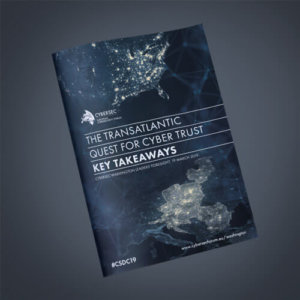 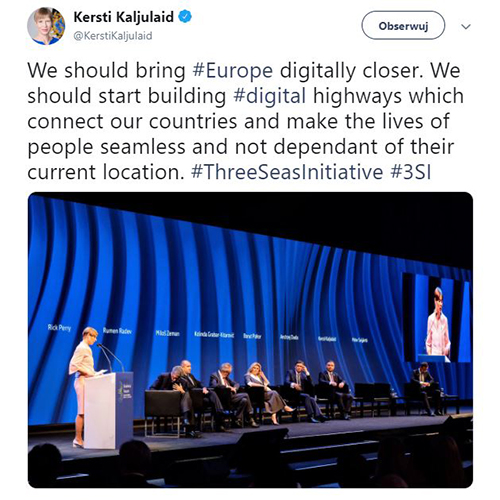 The concept of digital highways was recognised by President of Estonia,
Ms Kersti Kaljulaid, in her opening speech during the Three Seas Business Forum. 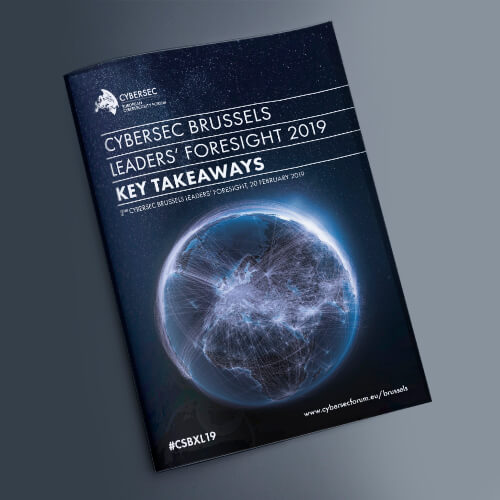 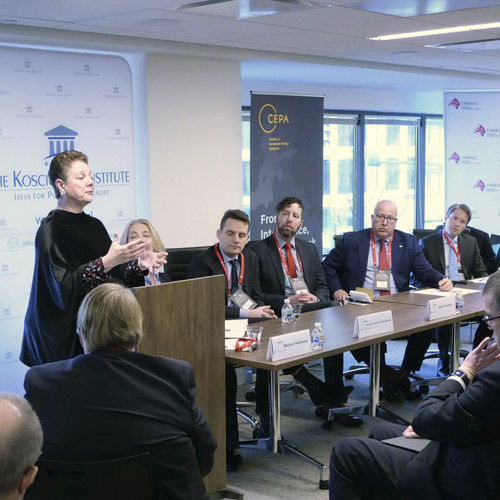 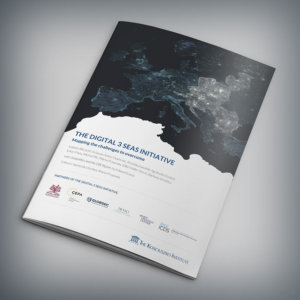 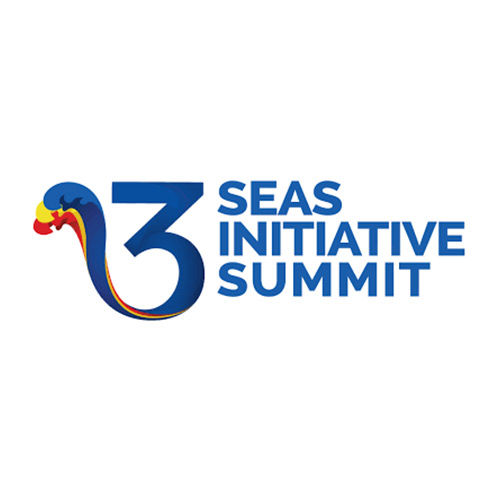 Publication of the Policy Brief – the pioneering study of building digital cooperation in Central and Eastern Europe The Digital 3 Seas Initiative: A Call

for a Cyber Upgrade of Regional Cooperation